1904 – France and Spain carve out zones of influence.

1906 – Algeciras Conference in Spain; France and Spain get the go-ahead to police Moroccan ports and collect customs fees.

1912 – Morocco becomes a French protectorate under the Treaty of Fez, administered by a French Resident-General.  The sultan has a largely figurehead role.

1943 – Istiqlal, Party of Independence, is founded to press for independence.

1973 – Polisario movement formed, aims to establish an independent state in Spanish Sahara, a territory south of Morocco controlled by Spain. The group has Algerian support.

1976-present Fighting between Moroccan military and Polisario forces; the war is a considerable financial drain on Morocco. 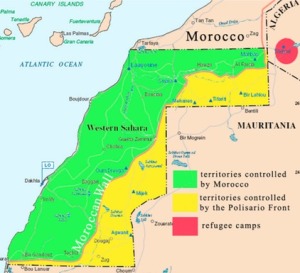 Disputed Region of the Western Sahara

2001 November – King Mohammed starts a controversial tour of Western Sahara, the first by a Moroccan monarch for a decade.

2002 July – Morocco and Spain agree to US-brokered resolution over the disputed island of Perejil.

2003 May – More than 40 killed when suicide bombers attack several sites in Casablanca, including a Spanish restaurant and Jewish community center. 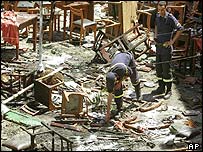 2004 July – Free trade agreement with the US comes into effect. It follows Washington’s designation of Morocco as a major non-Nato ally.

2006 January – Spanish Premier Jose Luis Rodriguez Zapatero visits the the Spanish enclaves of Melilla and Ceuta. He’s the first Spanish leader in 25 years to make an official visit to the territories.

2007 April – Three suspected suicide bombers blow themselves up in Casablanca, a few weeks after a suicide blast in an internet cafe weeks earlier.

2007 June – Morocco and the Polisario Front hold UN-sponsored talks in New York but fail to come to any agreement.

2007 September – Parliamentary elections. The conservative Istiqlal party, a member of the ruling coalition, wins the most votes.

2008 December – Two Moroccan men, Abdelilah Ahriz and Hicham Ahmidan, sentenced to 20 and 10 years in jail respectively in Morocco over Madrid train bombings of 2004.